In what has been dubbed as ‘Fortress Australia’, the Australian Government’s actions during COVID-19 has made it painfully clear what ‘Australianness’ really means. Particularly, the mistreatment of Indian-Australians, many of who are citizens born in Australia, has raised question marks for the future of bilateral ties between India and Australia.

Let’s start with the controversial travel ban in May against Australians returning from India, which received both domestic and international backlash. While no similar bans were placed on citizens returning from countries such as the United States (US) and United Kingdom (UK), many hence perceived the ban to demonstrate the existence of racism against Australians of Indian origin. While the ban was quickly overturned, the scars of being blocked out of one’s own country remain for many.

Going back to April 2020, Morrison’s announcement to visitors and international students that “it’s time to go home” was received with disappointment and shock from around the country. The intent behind the statement was clear. While Australia is content to economically benefit from non-citizens, the relationship appears one-way and merely transactional in times of crisis. For example, Indians studying at Australian universities, who comprise the second-highest international student population after Chinese students, were significantly impacted. Despite paying upfront and severely inflated university fees, Morrison reiterated that Australia would be unable to provide government financial support such as JobSeeker payments. So while there is optimism of enhanced ties between Australia and India, as seen through the Joint Statement released in the aftermath of the 2020 India-Australia Leaders Virtual Summit, the reality is that the self-interest demonstrated by Australia puts this relationship in jeopardy. In engaging with India in the future, such as in negotiating the ongoing India-Australia Free Trade Agreement, Australia must correct such rhetoric and reiterate the value of a two-way, symbiotic relationship.

The importance of the India-Australia relationship is further exacerbated when considering the panda in the room - China. While China was Australia’s largest two-way partner in 2019-20, the risks of an economic overdependence on China have recently come to light, as seen through the severe China-Australia trade dispute since 2020.

From a national security perspective, China’s actions in the Indo-Pacific region, including enhanced militarisation, infrastructure projects and cyber attacks, have also been a wake-up call for Australia to strengthen its India partnership. Likewise, “[i]n a strategic sense, India’s primary interest in bilateral relations with Australia relates to China and the US”, notes Dr Kadira Pethiyagoda, author of the recent book India Foreign Policy and Cultural Values. Specifically “India values its relations with Australia to the degree New Delhi supports using the US and its allies as a counterweight to China”.

Acknowledging the significant role of Australia in Indo-Pacific security, India finally extended an invitation to Australia for Exercise Malabar in 2020, a naval military exercise conducted alongside the US and Japan. The last five years have seen renewed attention on the India-Australia relationship. In 2018, the Australian Government released the Indian Economic Strategy to 2035, which recommended diversification of the economic relationship with India to sectors including agriculture, energy, resources, health care, financial services and infrastructure.

Food diplomacy has also been a focus of Morrison’s attempts to court India. Ahead of the first India-Australia Leaders Virtual Summit in June last year, Morrison tweeted a picture to Modi of his spin on the humble Indian samosa. Dubbed as a ‘Scomosa’, Morrison expressed his desire to share the snack with Modi, noting the vegetarian contents of the snack in nod to Modi’s dietary requirements.

Sunday ScoMosas with mango chutney, all made from scratch - including the chutney! A pity my meeting with @narendramodi this week is by videolink. They’re vegetarian, I would have liked to share them with him. pic.twitter.com/Sj7y4Migu9

Whether or not Morrison’s Scomosa stunt had an impact is debatable. Regardless, it seems that the 2020 India-Australia Virtual Summit resulted in a positive effect. It followed with the release of a lengthy Joint Statement which elevated the India-Australia relationship from a strategic relationship to that of a Comprehensive Strategic Partnership (CSP).

This CSP involves Australia and India enhancing mutual cooperation in the areas of science, technology and research collaboration, maritime cooperation in the Indo-Pacific as well as Defence cooperation. It further outlines a forward plan of engagement, with Foreign and Defence Ministers from both countries meeting together at least every two years. As part of this meeting, Australia and India decided to re-engage in the negotiation of a long-awaited Free Trade Agreement. If this agreement is finalised, it will allow additional market access for Australian agricultural and other exports in India. From a military perspective, India and Australia have also enhanced cooperation. For example, India-US joint Exercise Malabar is an annual naval exercise held since 1992. After years of reluctance in allowing Australia’s participation, India finally extended an invitation in 2020. Despite this closer military cooperation, Dr Kadira Pethiyagoda reiterates that “strategic autonomy will remain a priority” for India. That is, unlike Australia who is a member of alliances such as the Five Eyes (US, UK, Canada, New Zealand and Australia), “India is unlikely to ever submit to joining an alliance system”. This is one barrier that Australia will have to acknowledge in attempting a closer relationship with India.

Aside from India’s reluctance to enter into formal alliances, the other major barrier for the India-Australia relationship is the inevitable ‘C’ word - China.

The panda in the room

Historically, Australia’s desire to enhance economic ties with China hampered closer ties between India and Australia. Particularly, the withdrawal of Australia from the Quadrilateral Security Dialogue in 2007, a military relationship between the United States, Japan and India, was part of the Rudd-era policy to enhance Chinese engagement.

Australia’s traditional emphasis on China can be seen through the China-Australia Free Trade Agreement in 2015, which brought significant economic benefits to both parties. In 2019-20, China was Australia’s largest two-way trade partner, reaching $251 billion. Foreign direct investment also grew in this era in areas including infrastructure, services, agriculture and mining, with a total of $46 billion in 2019.

The myopic nature of government decisions to align with China are starkly clear now. The ongoing effects of a severe trade dispute between China and Australia have been crystallising since last year. This includes the imposition of harsh tariffs by China on a range of Australian goods including barley and wine. Imports have been altogether blocked on goods such as coal and cotton. As an overall impact, Department of Foreign Affairs and Trade officials told Senate Estimates officials last year that this trade dispute has caused a 40% plunge in the value of Australian trade with China.

The repercussions don’t stop there. In the Australian higher education sector, casualties are highly visible. According to the Australian Department of Education, Skills and Employment, international students from China comprise the highest proportion of students from an overseas country. Due to reasons such as COVID-19 as well as racism, China’s Foreign Ministry last year warned against Chinese students and tourists from travelling to Australia. Foreign Ministry spokesperson speaking on travel advice to Australia for Chinese students. Source: Ministry of Foreign Affairs of the People’s Republic of China

Historically, India has also been no stranger in liaising with China, who it shares a land border with. Over the last decade, the South Asian region has become a playground for economic play between the two Asian superpowers. China has significantly expanded its investment in South Asia through projects such as the Belt and Road Initiative (BRI). Despite all other South Asian countries except Bhutan signing up, India has repeatedly refused to, claiming that it does not offer a level playing ground for Indian businesses. Aside from the extensive economic play, military conflict between India and China has risen. In 2017, the Doklam crisis arose due to China’s attempts to build a road in an area claimed by both China and Bhutan. After Indian soldiers intervened to assist the Bhutanese side, a standoff between China and India lasted for 73 days. Such instances of military skirmishes have contributed to ongoing tensions.

A bright future for 'Samosaplomacy'?

While different in many ways, the commonalities between India and Australia as English-speaking democracies who are part of the Commonwealth makes bilateral engagement easier and less susceptible to misunderstanding. Furthermore, as acknowledged by Prime Minister Modi in response to the Scomosa tweet last year, both countries are ‘[c]onnected by the Indian Ocean’.

So if Australia is to strengthen this promising relationship, it must come to grips with the prejudices and the myopic viewpoints that it has held in the past, most recently witnessed through its actions towards Indian-Australians during COVID-19. Rather than focusing on Australia’s economic greed, the relationship should foreground what both sides have to offer.

Once this is achieved, the relationship will not only benefit Australia and India, but it will demonstrate that neither country is dependent on China’s coercive diplomacy. Even though a formal alliance system is not an aim for India, closer military and security cooperation between Australia and India will help further the aim of a free and stable Indo-Pacific region.

Afeeya Akhand is a writer and a Master of International Security student at the University of Sydney. She can be contacted at afeeya@saaricollective.com.au We, at SAARI Collective, wish to mark National Science Week by celebrating some remarkable South Asian Women working in STEM. Join us as we kick off our series by sharing the journeys of Dr Asha Rao and Dr Astha Singh. Matters of the mind: using meditation for stress recovery

As Australia navigates its way from yet another lockdown – and a widespread one this time – it is natural for stress and anxiety levels to be on the rise. 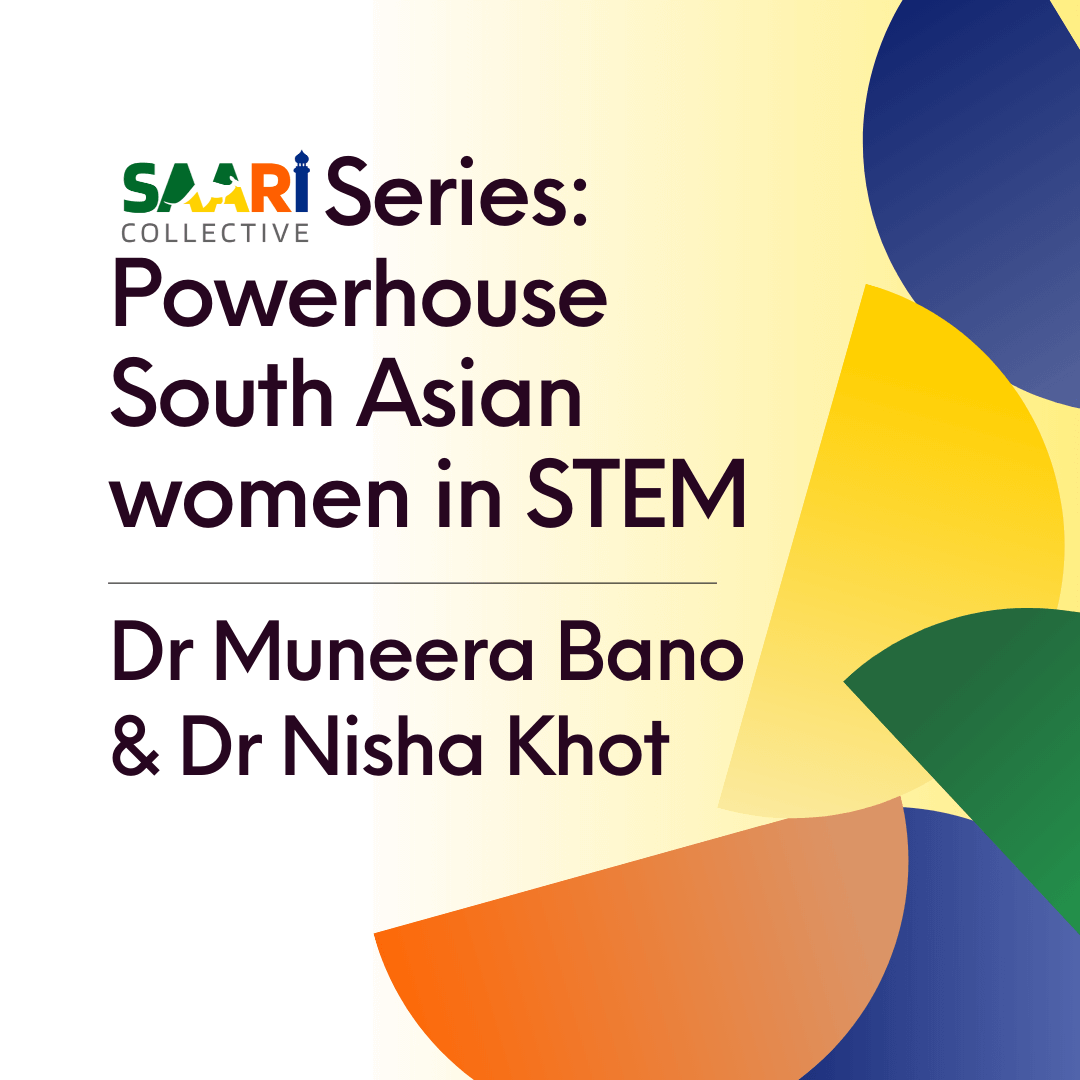 We conclude our Powerhouse South Asian Women in STEM series by sharing the journeys of Dr Sanam Mustafa and Dr Krati Garg. Join us as we celebrate their resilience and unpack their stories – packed with humble beginnings, challenges, explorations of cultural identity, learning and unlearning, small and big wins and the unceasing desire to grow.