Dejavu. It’s been almost two weeks in Melbourne’s lockdown number four, and even though the mind knows it's coped with worse, the body remembers last year’s all-plummeting slide toward boredom and disconnection. The count never stopped from those 112 continuous days under lockdown last year. So right now, for those in Melbourne, it’s 112 + 11.

During lockdown, our screens hold greater importance. They often become our main outlet for entertainment, connection, education and fulfilment. In the past I’ve binged on my usual comforts. Sure, watching reruns of The Office brings the warmth of familiarity, and the decompression they provide has been an essential ingredient in my accidental mental health plan. But reruns can also bring a feeling of inactivity. Reuniting with capital-F Friends, especially now, adds to our sense of Groundhog Day; every episode feels like The One We’ve Already Watched.

These days, I carve out a slice of time to experience something new and, hopefully, transformative. When I do this, I feel like I’ve broken out of the endless cycle of reacting to work tasks and life errands. Entertainment isn’t a distraction or a break in between ‘productivity’, it is instead the joy that we work and live for. Making a promise to travel somewhere via my screen helps me assert control over time passing, which brings me a sense of autonomy, confidence and authenticity.

So here are four new recommendations that are beautiful and life-affirming; that have resonances with the current moment, and can give you that end-of-the-day feeling that “I am living life” rather than feeling like "life is living me.” Dave Chappelle, Yasiin Bey (FKA Mos Def) and Talib Kweli have joined forces for a podcast that is a multi-textured mix of storytelling, hip-hop, and variety show.

The Midnight Miracle takes the podcast form to new heights in sound editing and mixing, especially in the way it rhythmically edits meandering but enchanting monologues by Yasiin to music.

Within the first few minutes of the first episode, Yasiin draws a painful breath as he recollects his friend, Amy Winehouse. The editor lets the breath reverberate; there’s a silence, and then a drum roll kicks off the anguished soul of ‘Love Is A Losing Game.’ After we are given space to process the collage of unseen love and friendship between Yasiin and Winehouse, and are reminded of the beautiful individuality of Winehouse's music, the editor reinserts Yasiin’s rhythmic monologue over the song.

Podcasts often give me information fatigue. But this podcast is more akin to music - it’s spacious in its sound design, cinematic in its editing, and it sets a vibe rather than try to educate.

The first episode, How To Inspire, is a devastating and beautiful meditation on depression and friendship, as Yasiin and Chappelle reflect on their experiences with Winehouse and Robin Williams. They ask themselves the question - how do you inspire someone who doesn’t want to live - to just live? Yasiin replies, whenever you can, “do something beautiful for that person.”

Where to watch: Netflix

The basic plot finds Andre trying to reunite with his high school crush on a road trip, but the story is delivered in hidden camera stunts where real people are unwittingly lured in to play the supporting cast.

Highlights include a broadway musical number performed by juice attendants in the middle of a strip mall. One scene has an escaped convict (Tiffany Haddish once again proving she is “comedy on a cellular level”) asking a sympathetic and courageous graffiti cleaner to help her while she evades the police. In just a few minutes, their interaction becomes a multifaceted portal into people’s ambivalence to authority, as kindness, and the kinship of race and class, emerge as drivers of human behaviour under pressure.

Bad Trip is a hilarious escape, and produces a head scratching sense of awe at how Andre could have pulled off some of these pranks. Unlike other prank comedies like Borat, ‘normal people’ aren’t the butt of the joke here. When strangers respond to the performers in crisis, it’s a reminder of our interconnectedness, and affirms our own sacrifices for the collective good during lockdown.

TV Show: Master of None season 3

Where to watch: Netflix

The new season of Aziz Ansari’s Netflix series is slow-building. Ansari’s character Dev has been sidelined, and the hyper-active and playful essence that made him famous has disappeared. Ansari directed and co-wrote all the episodes, and one can’t help but think he’s lost confidence in himself as a protagonist since an accusation that he was forceful on a date was published in 2017. However, his character does make the odd appearance, now with darker, pettier shades.

Season 3 instead focuses on the relationship breakdown of newlyweds Denise and Alicia, and mirrors the ostensibly slow and calming rhythms of lockdown that are a cover for slow-boiling cabin fever. The camera sits still, at a distance, watching the couple unravel within a secluded and beautifully decorated home. Most scenes play out in a single shot within a tight 4:3 aspect ratio. These visual elements produce stillness, boredom and claustrophobia at different times.

This season is slower than previous ones, but its willingness to linger on mundane daily routines in the midst of grief and loneliness resonates with our own experiences during COVID-19.

Lovers Rock is a fairy-tale escape to a reggae house party in 1980s London.

The black characters in the film are presumably excluded from the white nightclub scene, so they create their own neighbourhood parties where they charge $5 a head. What makes Lovers Rock a unique viewing experience is its sensuousness, which drips from the screen and animates a party inside you.

Aunties cook curries in the kitchen, DJs hack sound systems, faces yearn on the outskirts of the dance floor, bodies circle each other and MCs sway in smoke clouds. The film sheds the choreography of waking civilisation, restores the enchantment of the human body and showcases the wild expressiveness of our peacocking to find love - just like any good party should.

Lovers Rock is the second film in Steve McQueen's (12 Years A Slave) ‘Small Axe’ film anthology. Each film tells a different story about West Indians in England from the 1960s to 80s. While most of the films are about systemic racism in education, commerce and policing, Lovers Rock is a respite from black oppression. This is a film about the endless possibility offered by a Friday night; a thin slice of time filled with abandon and chaos, where life transcends surviving to grasp for joy.

Lovers Rock will give you something to look forward to at the end of lockdown - a party. And hopefully it will inspire you to trade your Uniqlo smart casual, or that op shop musty cardigan, for something more daring. When we get our freedom, hopefully we will honour it with a bit more ceremony.

Chenturan Aran is a playwright and journalist from Melbourne. He's a member of SAARI's Editorial Team and you can reach him at Chenturan@SAARICollective.com.au. 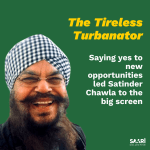 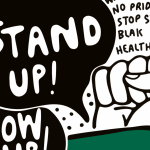