“If you aren’t political about theatre, you shouldn’t practice theatre.”

South Asian theatre has long been a mainstay of South Asian art and culture. Theatre in South Asia mainly stems from the Indian tradition and is founded on seminal texts such as the Natyashashtra (the Science of Drama), a 2000-year old Sanskrit treatise on dramaturgy), the two Hindu epics Ramayana and the Mahabharata, all of which are performed and enjoyed far and wide in countries like Thailand and Indonesia. The history of prominent playwrights in South Asia can be traced back to prominent playwright-kings and art forms, such as fourth century’s Shudraka - the author of Mrichchakatika (The Little Clay Cart), and the alluring dance-drama form Kathakali, which stems from the 17th century and is venerated and performed all over Kerala.

Despite this long and illustrious history, South Asians today are scarce in theatre, especially in Western countries and amongst the diaspora. One reason for this is that South Asian immigrants tend to see theatre, and the arts in general, as an unstable job that doesn’t pay well. They’re not wrong. South Asian parents in the West want their children to be doctors, lawyers or engineers, which are considered economically stable occupations. Another reason is that theatre industries in the West are overwhelmingly white, to the point where famed composer Andrew Lloyd Webber publicly remarked British theatre as being “hideously white”. And the situation is no different here in Australia, where playwright Andrew Bovell has critiqued Australian theatre as being “dominantly white”, with only 10% of artistic directors being from culturally diverse backgrounds.

However, things are slowly changing, as there are now an increasing number of South Asian theatre practitioners challenging these barriers by doing brilliant work in Australia. SAARI caught up with some of them and asked them for their best tips to propel to the forefront young South Asians aspiring to the theatre limelight.

The stars of theatre

Taufeeq Ahmed Sheik is a full-time actor, writer and director. He has been doing theatre since a child but had taken a fifteen-year sabbatical from it until new circumstances where he could be creative again presented themselves. He had, in his own words, “a chat with (himself),” and realized that he “had to do what he had to do.” He had worked in many industries for a decade and then became an entrepreneur. He had been both employee and employer and despite their pros and cons, neither suited him. Something inside him had been screaming that he needed to get back into the arts, which he did with stints in Shakespearean plays and Broadway musicals. 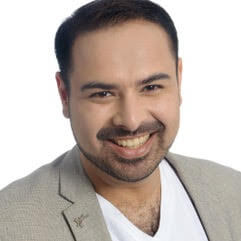 Taufeeq resumed his creative pursuit in 2018 after a sabbatical of 14 years and now works in the Australian performing and literary arts spectrum with an added focus on the South Asian Community. Source: supplied.

Just like him, there are other South Asians who do it all.

Aran Thangaratnam is a successful playwright with a background in comedy sketches. He wrote the dark comedy “Aussie Ethnic Identity Crisis” in 2019 which was performed at the Melbourne Fringe Festival. He also fulfilled the ultimate dream of South Asian parents by becoming a doctor, while also keeping his passion for the arts alive. He is currently a General Practitioner in training, and his play “Stay Woke” is currently showing at the Malthouse in Melbourne, Victoria. Aran Thangaratnam’s latest write, Stay Woke,  began its life in late 2019 and was inspired by a ski trip he had taken with some friends that eventually descended into chaos, causing him to leave early on a bus home alone. Source: supplied.

Over in New South Wales, Neel Banerjee is the creative director for Nautanki Theatre. He got into theatre as a first-generation migrant to Australia. To him, theatre is entirely political.

“Theatre is a political tool.” “You are inviting an audience to sit quietly in the dark and then actors talk to them from a pedestal—this is in itself a political act. Be clear about what theatre is for. If you aren’t political about theatre, you shouldn’t practice theatre.”

The Monotonous 'whiteness' of Australian theatre

In the midst of such diverse South Asian talent in the theatre scene who are pushing the limits of what is possible, it would be easy to forget that the Australian theatre community is still overwhelmingly white. Practitioners might find it difficult to pinpoint the racism within the scene, but the situation is stark.

In 2018, The National Institute of Dramatic Art was accused of systemic and institutionalized racism, leading to a public apology from its chief executive. When they do find work, actors of colour find it impossible to get auditions for roles that aren’t culturally specific, as if they can only play one identity on stage. This puts actors of colour in an ethnic box and limits their opportunities to play characters that are not based on their racial or ethnic background.

Banerjee has experienced this himself, leading him to believe that Australian theatre is still very white. While some diverse work has begun recently, when he started in 2008, it was peddling against the strain.  “We feel the racism being a person of colour,” he says. Banerjee contextualises the state of affairs within the wider Australian society. “You have to understand the fact that till early 70s, this country was operating under the White Australia Policy.” This was a series of government policies and directives designed to keep Australia racially and culturally homogenous – to keep Australia white. A history such as this permeates into every aspect of our lives, including the arts. Banerjee reminds us: “You can’t, in 50 years, get rid of racism in the community.”. Thangaratnam too believes the theatre world in Australia to be overwhelmingly white, but he also feels that there seem to be more opportunities for people of colour. “It is at the forefront of people’s minds and there seem to be changes.” Things definitely seem to be progressing. Sydney has a South Asian theatre festival in Parramatta and in 2020, Ghanaian-Australian actor Tarik Frimpong launched the Artists of colour Initiative, a scholarship competition for theatre performers of colour.

When it comes to whites privilege in Australian theatre, Sheik makes a distinction between the arts community and the arts business community. According to him, there are people who want to create art and then there are the people who want to make money out of art and while most people want to be both—since it is definitely preferable to be paid for your work—finding the combination is difficult. “The arts community is inclusive in nature and desperate to tell different stories in different ways but the business of arts, this (community) is cautious. (To them), it comes down to return to investments and they wanna play safe.” This is where he sees the root of the lack of inclusivity and diversity.

Despite the problems, Sheik also believes there is an extremely vibrant arts community in Australia with the potential for the nation to be a flag bearer for inclusive arts. He feels  that we should “focus on the generation who are fluid with their intentions and welcoming and inclusive.” He reiterates that is it is crucial to “find your own pathway.”

Thangaratnam encourages young artists to try some independent theatre, to even go and put on a show by themselves, no matter how frightening it is. He thinks it is important that artists “speak about their experience” in an honest way. “Just put it up and do the thing, even if it is the hardest and scariest part.”

Banerjee's foremost advice for young South Asians is: Be Bold. He believes that everyone, not just South Asians, should “use theatre as a political tool and a mode of expression.” Banerjee does have a warning though. He feels there is a tendency within the young generation to be “recolonised:” a term he describes as the feeling of responsibility to please the greater Australian community which in turn means watering down one’s art and becoming fearful of using cultural language and markers.

“The moment you use theatre to please someone, you’re diluting theatre. Fight that."